Medicare is commonly known for providing health insurance for older people; however, a significant portion of the program’s beneficiaries are under age 65.[1] Individuals with permanent disabilities and End Stage Renal Disease (ESRD) qualify for Medicare before turning 65. This subset of Medicare beneficiaries, who often deal with multiple chronic conditions and serious health complications, are among the most vulnerable and often need help to pay for their care. Traditional Medicare imposes significant cost-sharing requirements on beneficiaries in the form of coinsurance, copayments, and deductibles. As a result, most beneficiaries seek supplemental insurance coverage to help with Medicare’s cost-sharing.[2]

Medicare Supplement Insurance (commonly known as Medigap) is a form of supplemental insurance that helps pay for “gaps” in Medicare payment. Medigap does not pay for gaps in services not covered by traditional Medicare, but rather for cost-sharing when coverage is provided by Medicare Parts A and B.  Given the high costs of health care and Medicare cost-sharing, Medigap policies are key to affording care for people in traditional Medicare. Unfortunately, however, younger beneficiaries with disabilities face significant obstacles to purchasing these policies. These hurdles come in the form of restricted access to Medigap coverage and prohibitive premium costs.

Federal law requires insurance companies that sell Medigap policies to abide by certain consumer protection requirements.[3] However, these only apply to Medicare beneficiaries who are 65 and older. Individual states, however, have the latitude to offer varying degrees of consumer protections that affect the availability of Medigap plans to younger beneficiaries with disabilities. Unfortunately, many states do not elect to extend these protections to the very people who need them the most.

Insurance companies are required by federal law to provide a one-time, 6-month open enrollment period for Medigap policies that begins on the first month that a beneficiary turns 65 and elects Part B coverage. During this period, these beneficiaries must be “guaranteed issue” of Medigap plans regardless of their age, sex, or health status. While they may be subject to higher premiums, a beneficiary aged 65 or older cannot be denied Medigap enrollment by an insurance company.

Since the federal requirements do not apply to beneficiaries under age 65, states have the choice to requiring these same open enrollment and guaranteed issue provisions for the younger Medicare population. Currently, 31 states grant some degree of protection to disabled and ESRD Medicare beneficiaries.[4] Of the 31 states, some choose to extend the protections only to those with a disability (e.g. California and Vermont) while Massachusetts and Delaware extend it only to those with ESRD. In the 19 states without state-protections (with the exception of Arizona and Nevada), insurers still voluntarily offer Medigap policies to those with disabilities and ESRD. However, without guaranteed issue, insurance companies have free reign to deny coverage due to age, sex, and health status. Those who are in most need of help paying for their coverage because of the costly nature of their health condition may be denied coverage for that very reason. 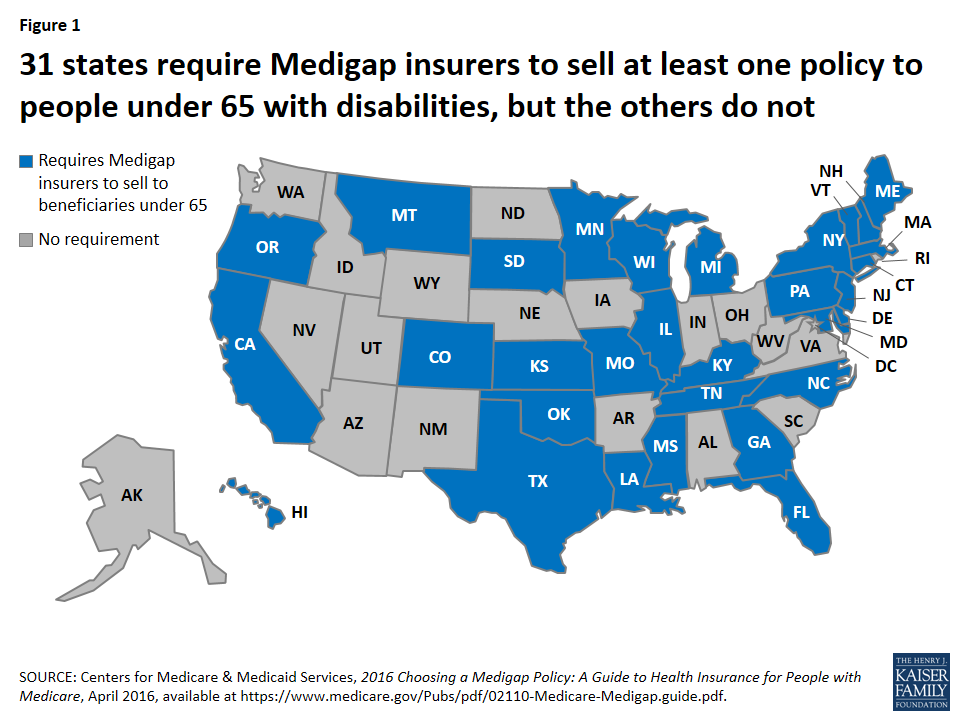 Fortunately, Congress is considering legislation to extend coverage protections to all beneficiaries, regardless of age or disability. On September 28, 2016 the “Medigap Consumer Protection Act of 2016” was introduced in the House of Representatives.  This Bill would amend the Social Security Act to give Medicare beneficiaries with disabilities and ESRD the same open enrollment and guaranteed issue protections currently afforded to those aged 65 and over.[5] The proposed amendments require insurers to guarantee issue Medigap plans during a six-month open enrollment period that begins as soon as anyone becomes entitled to or enrolled in benefits under Part A and/or enrolled for benefits in Part B. Individuals will be guaranteed issue regardless of their age, sex, or any preexisting conditions.[6] The Secretary of Health and Human Services would have authority to phase in these guaranteed issue requirements over a five year period and a one-time open enrollment would be offered following this phase-in to allow all consumers to enroll in coverage with new protections.

Even if a beneficiary under age 65 lives in a state that has guaranteed issue protections, beneficiaries still often face prohibitively expensive premiums. Insurance companies may offer a variety of Medigap plans, which are identified by letters A through N.[7] Plan benefits are standardized by the Federal government (e.g. all Plan A’s are the same, all Plan B’s are the same, and so forth) regardless of which insurance company is selling the plan. The variation in the plans is in the premium pricing, not the standardized benefit packages: Company X may sell Plan A to an individual for $100/month while Company Z may sell Plan A to that same individual for $200/month. Furthermore, companies may engage in medical underwriting discrimination where higher premiums are charged to individuals based on a variety of factors including age, sex, domicile, and medical history.[8] Thus, while they may be guaranteed issue regardless of their age/sex/health status, disabled and ESRD Medicare beneficiaries can still be charged such high premiums based on their status that purchasing a Medigap policy is prohibitively expensive.

Insurance companies know that people who receive Medicare before reaching age 65 because of their disability/ESRD usually have higher health costs than otherwise healthy individuals qualifying for Medicare at age 65. Thus, while age is typically inversely proportional to premium costs, the opposite is often true with Medigap plans. Medicare beneficiaries who are under the age of 65 are sometimes charged far higher premiums even than those who are over 80 years old.  For example, New Mexico, a state that imposes guaranteed issue of Medigap plans to beneficiaries with disabilities and ESRD, has large variation in plan pricing. One company offers Plan A at an annual premium of $3,542 for an under-65 beneficiary while only charging $1,933 for an 80+ beneficiary.[9] Also, as mentioned, premiums vary wildly between companies for the same standardized plan; another company in New Mexico was found to charge only $1,097 for Plan A to under 65 beneficiaries.

Some state insurance departments have imposed rate restrictions to prohibit pricing discrimination.  Kansas implemented a policy to grant under age 65 beneficiaries equal access to all Medigap policies sold within the state. The same federal protections that apply to those over age 65 have been extended to those with disabilities; they will have guaranteed issue during an open enrollment period that starts on the date they elect Medicare Part B. Further, supplemental policies for people with disabilities must be sold at the same rate as those for beneficiaries aged 65 and over.[10]

The proposed Medigap Consumer Protection Act of 2016 would apply federal restrictions on price discrimination to all insurers. The Bill would prohibit issuers of Medigap policies in all states from discriminating in pricing of policies based on the age of the individual. It would also prevent price discrimination on the basis that the person is disabled or has ESRD, but only to the extent that it does not “jeopardize [their] access to such policy.”[11] Thus, how much room insurers have to adjust premiums based on the person’s disability or ESRD status may still vary. Finally, the Bill would restore access to first-dollar Medigap coverage to all beneficiaries, meaning that Medigap plans would not be prohibited from offering coverage of Part B deductibles beginning in 2020, as is now planned.

Individuals who are under age 65 who qualify for traditional Medicare due to their disability or ESRD are among those with the greatest health care needs. They are greatly in need of affordable Medigap policies to supplement Medicare cost-sharing. However, because of a lack of uniform regulation among the states regarding the guaranteed issue of these policies, a significant percentage of beneficiaries under age 65 cannot purchase Medigap plans. Further, a lack of regulation regarding the pricing of premiums in most states means even those who do have plans available to them cannot afford them. As a result, the most vulnerable beneficiaries are left to search for other ways to finance their health care, while healthier Medicare beneficiaries enjoy greater choice and lower costs.

Federal law should be extended to grant consumer protections to all Medicare beneficiaries, not just those over age 65. Further, all states should follow states like Kansas where beneficiaries under age 65 are given the opportunity to purchase plans at rates comparable to their counterparts aged 65 and older. Those who obtain Medicare because they are under age 65 and disabled should be afforded the same access to care as those aged 65 and older. By removing obstacles to access and prohibitive costs for Medigap plans, all Medicare beneficiaries would have greater access to necessary care.