The Affordable Care Act (ACA), signed into law in 2010, was enacted to increase the quality and affordability of health care and lower the rate of uninsured by expanding private and public health insurance.  One mechanism the ACA established to achieve this goal was the creation of health insurance “Exchanges” – regulated online marketplaces where individuals and small businesses can purchase Qualified Health Plans (QHPs) that provide minimum essential coverage at specified actuarial values. Depending on their income, individuals purchasing QHPs on an Exchange may qualify for reduced cost sharing and premium subsidies in the form of tax credits, making the plans affordable.

As a result of the Exchange QHP tax subsidies, some people may find that coverage under the ACA appears to be a more attractive option than Medicare. Those who currently have QHPs may believe they want to keep their plans rather than transition to Medicare. Others who are enrolled or otherwise eligible for Medicare may also wish to drop their coverage in favor of a QHP.  Thus, given that historically most people have transitioned from employer-sponsored plans to Medicare rather than from QHPs to Medicare, the advent of Exchanges has spawned new transition of coverage issues and questions.

Discussed below are common transition of coverage situations and their associated technicalities and consequences. Failing to enroll in Medicare during the established eligibility periods may result in permanent Medicare premium penalties and gaps in coverage due to restrictions on when enrollment can occur. These penalty rules have not been changed to accommodate transitions from QHPs. As such, for the majority of the population, it is generally not beneficial to forgo Medicare coverage in favor of QHPs on the Exchange marketplace.

There may be circumstances where an individual takes a look at an Exchange QHP and finds that it offers better coverage and affordability (actuarial value) than what they currently get under Medicare Part A and B.  Under section 1882(d) of the Social Security Act, it is unlawful to sell to an individual a plan that duplicates coverage that the individual already receives under their Medicare Part A or B plan.[1] This law, referred to as the “anti-duplication statute,” remains applicable in the ACA Exchange context. Therefore, unless the Medicare beneficiary drops Medicare coverage, issuers offering plans on the Exchange may not lawfully sell the beneficiary a plan.

Given that plans in the Exchange are made affordable through tax credits and subsidies however, it may be the case that a Medicare enrollee in this Scenario may find less expensive and better coverage by disenrolling from Medicare and purchasing a QHP. Individuals who must pay a premium for Part A coverage (a small minority of Medicare beneficiaries) are permitted to drop both their Part A and Part B coverage and purchase a plan on the Exchange with tax subsidies.[2] There are potential repercussions to this election, however. First, if an individual chooses to enroll in Medicare at a future date, he or she may have to pay penalties in the form of higher premiums for Part A and B proportionate to the length of time enrollment is deferred. The individual will also be limited to enroll during the general enrollment period and may experience a gap in coverage.

Individuals entitled to receive premium-free Part A coverage (the majority of Medicare beneficiaries) may also drop Medicare coverage to purchase a plan on the Exchange. These individuals, however, will incur a steep penalty for dropping coverage: They will also have to drop their retiree benefits (social security or railroad) in addition to paying back all benefits they’ve already received. Furthermore, those who are entitled/eligible to premium-free Part A will lose any premium tax credits that may have been on the Exchange, often rendering the QHP less attractive in comparison to Medicare.[3]

Finally, while the ACA placed underwriting restrictions on charging higher premiums based on preexisting health conditions, insurers are still able to discriminate based on age when they price plans. Consequently, enrollees who are over 65 may find QHPs to be the more expensive option.  These factors should highly disincentivize most Medicare beneficiaries from dropping Medicare in favor of a private QHP.

The Social Security Act’s prohibition on duplication of coverage does not apply to those who are eligible for Medicare but have not yet enrolled (i.e. those who have turned 65 but are not yet collecting social security or railroad retirement benefits, those with disabilities or ESRD).[4]  Thus, as explained in Scenario 1, an individual may choose to purchase a QHP offered on the Exchange because he or she believes it offers a better value than Medicare. However, the same drawbacks apply; those who are eligible for premium-free Part A coverage will not qualify for the benefits of premium tax credits when purchasing plans on the Exchange. They will also suffer the consequences associated with late enrollment onto Medicare Part B and D. As result, purchasing a QHP in lieu of enrolling in Medicare would not be a prudent choice for most individuals who are eligible for Medicare.

An issue associated with this Scenario is that many online Exchange websites do not appear to have any mechanisms in place to alert shoppers that they are currently eligible for Medicare.  An individual who is eligible for Medicare (and not automatically enrolled) might not be aware that Medicare is available to them and believe that a QHP is their best option. Thus an individual could purchase a QHP without premium subsidies and miss their Medicare enrollment window. State-implemented Exchanges were required to have eligibility software in place by 2014 to automatically defer age-appropriate health care shoppers to Medicare.[5] Based on a perusal of Massachusetts and Connecticut’s Exchange sites, this does not appear to have been implemented.

State Exchanges do have the ability to alert people to the fact that they are eligible for Medicaid plans. For example, on Connecticut’s Exchange website, there is a prompt to input age and income in order to view available plans/subsidies. When entering an income that is eligible for Medicaid, the website alerts the individual that he or she may be eligible for a more affordable Medicaid plan before showing any QHP options. An example from the Connecticut Exchange is as follows: 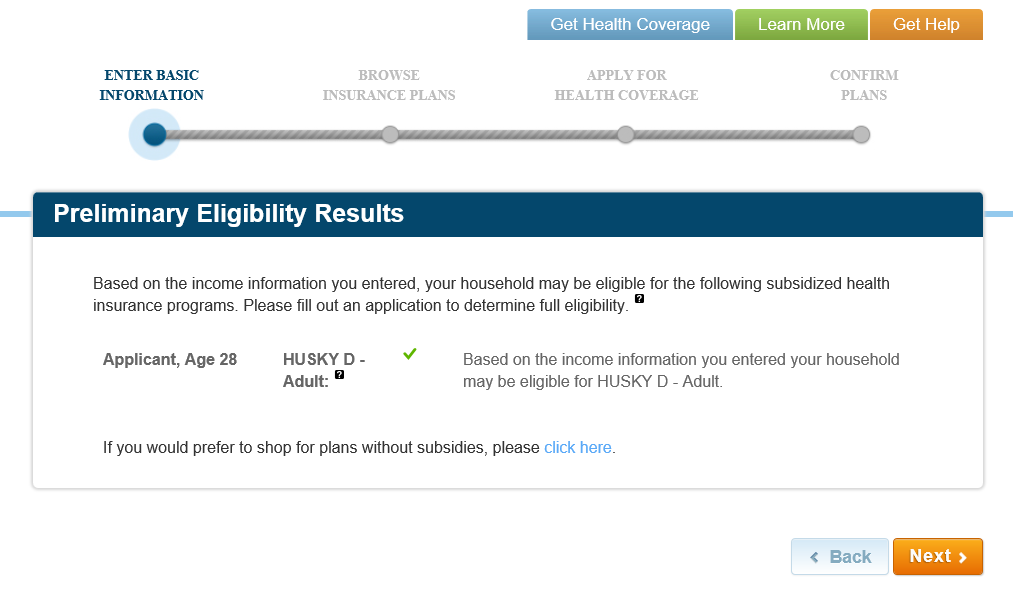 A similar alert does not appear when an individual enters an age that would qualify for Medicare. The lack of this feature for Medicare may be because Medicare cannot be purchased through the Exchanges (while Medicaid plans can be). Whatever the reason, CMS has clarified in their FAQ that Exchange systems are simply not set up to prevent Medicare beneficiaries from enrolling in QHPs.[6]

As in the other Scenarios, it may be ill-advised to keep a QHP and forgo Medicare unless an individual is not entitled to receive premium-free Part A coverage. The majority of Medicare enrollees receive free Part A coverage and will thus lose out on tax credits and reduced cost-sharing benefits offered on the Exchange as soon as they become eligible for (not necessarily enrolled in) Part A.  Therefore, a QHP purchaser likely should disenroll from their Exchange plan and opt for Medicare instead. If an individual is not entitled to free Part A and thus continues to receive the tax benefits, there are no restrictions to keeping their Exchange plan if they find it to be of better value.  Furthermore, CMS has issued regulations clarifying that Medicare eligibility or entitlement is not a basis for non-renewal or termination of an individual’s QHP.[7] It is important to note, however, that these individuals will still face permanent Medicare premium penalties and gaps in coverage should they choose to enroll in Medicare at a later date.

Similar to Scenario 2, there are problems with Medicare eligibility notification on the Exchange websites. In theory, when someone becomes eligible for premium-free Part A Medicare, the premium subsidy they receive on their QHP should automatically terminate and change the price of their plan. CMS regulations require Exchanges to redetermine the eligibility of a QHP enrollee if it receives new information about the enrollee through periodic examination of data sources and records.[8] If one becomes eligible for Medicare while enrolled in a QHP, the Exchange system is required to periodically detect this, make any adjustments (e.g. remove subsidies if entitled to free Part A), and promptly notify the enrollee of changes.

CMS has recently clarified that in the initial stages of implementing this notice requirement, only those who are dually enrolled in both Medicare and a QHP will receive notices. Those who are only eligible for Medicare will not, for the time being, receive any type of notice that their QHP subsidies will be lost. Therefore, consumers must be diligent in manually terminating their QHP plans promptly upon becoming eligible for premium-free Part A, or risk having to pay back taxes at the end of the year for the subsidies that they continued to receive.

As explained in Scenario 3, Exchanges have mechanisms to detect changes in eligibility regarding Medicare and send notices. CMS has stated that these notices, which will be sent via mail, will initially go out to those who are currently dually enrolled in both a Medicare and QHP. These notices will inform the consumer that because of their Medicare enrollment, they are no longer eligible for subsidies that they may be receiving on their QHP. It is not clear, however, whether the Exchange websites themselves will actually notify an individual of their Medicare status. Thus, a beneficiary may not find out about their Medicare enrollment until either they receive one of these notices or their ID card arrives in the mail. It will then be incumbent upon the beneficiary to terminate their QHP immediately to avoid paying for double coverage and back taxes. If for some reason the individual chooses to be double covered, Medicare will be the primary payer.[11]

With the goal of expanding access to quality and affordable health care, the Affordable Care Act has made strides in reducing the number of uninsured through its creation of Exchanges and associated subsidies. At the same time, as a result of ACA, Americans who are eligible or enrolled in Medicare are faced with new decisions as to their source of health care coverage. While the Qualified Health Plans offered on the Exchanges can provide attractive monetary incentives, current and prospective Medicare beneficiaries must choose their source of coverage carefully. Failing to enroll in Medicare during established eligibility periods may result in permanent Medicare premium penalties and gaps in coverage that offset any advantages provided by QHPs. Thus, the majority of the American population should not forego Medicare coverage in favor of QHPs in most circumstances.