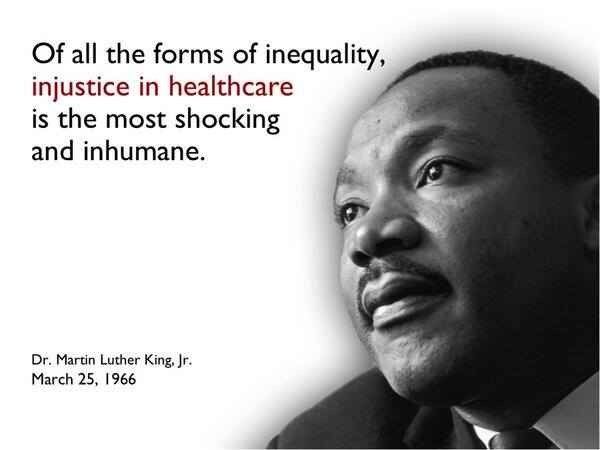 On Monday, January 15, we will pause to reflect on the incredible legacy of Dr. Martin Luther King Jr. In a time such as ours, when faith in institutions is shaken, new generations feel the sting of bigotry and common decency often seems passé, Dr. King’s dream has never been more relevant. Dr. King had a vision for an America where every man, woman and child had equal access to the gifts of justice, fairness and opportunity, being bound by a common humanity. The civil rights movement, for which he gave his life, was a movement for an equality that included access to education, fair wages and health care. Activists marched with signs demanding an end to hospital segregation, stating that "Jim Crow Must Go," and proclaiming "I Am a Man," as a declaration that their lives mattered.

The year 1965 was a seminal year for the civil rights movement as events unfolded that would change the course of our country. Courageous activists at the Edmund Pettis Bridge in Selma, Alabama marched for voting rights and against police brutality. The Voting Rights Act was signed into law, removing many discriminatory barriers to voting. And the Social Security Act Amendments, which established Medicare and Medicaid, was signed into law by President Lyndon B. Johnson.

The creation of Medicare and Medicaid moved the country closer to recognizing health care as a right for many and not a privilege for the few. As a champion of health equity, Dr. King stated “Of all the inequalities that exist, the injustice in health care is the most shocking and inhuman[e].” Organizations such as the NAACP, the Medical Committee for Human Rights and the National Medical Association fought passionately for equal access to quality care. Medicare’s role in leveling the health care playing field was dramatic. In order for hospitals to receive federal Medicare funds, they had to abide by federal anti-discrimination provisions, which dealt a deathblow to segregation. Anticipating Medicare’s impact, President Johnson said, “There are those, alone in suffering who will now hear the sound of some approaching footsteps coming to help. There are those fearing the terrible darkness of despairing poverty – despite their long years of labor and expectation – who will now look up to see the light of hope and realization.”

In our day, we witnessed the passage of the Affordable Care Act (ACA), the most significant piece of health care legislation since Medicare. The ACA ensured that many people of color who had preexisting conditions received access to quality coverage. ACA also ensured that people with coverage could access free preventive services and wouldn’t have to worry about lifetime coverage limits. ACA also strengthened Medicare, and made Medicaid available to more Americans than ever before. Attempts to weaken Medicare, Medicaid and the Affordable Care Act through legislation or executive action must be rejected.

On August 28, 1963 at the Lincoln Memorial, Dr. King proclaimed, “I have a dream that one day this nation will rise up and live out the true meaning of its creed: "We hold these truths to be self-evident: that all men are created equal.” The Center for Medicare Advocacy is proud to celebrate the dream of Dr. King and to advocate with our many dedicated partners for fair access to health care for all Americans.