On April 30, 2020, the Center for Medicare Advocacy held its seventh annual National Voices of Medicare Summit and Senator Jay Rockefeller Lecture. Due to the ongoing COVID health crisis, the Center adapted the in-person program to a “virtual” Summit and Rockefeller Lecture, and rearranged with presenters, sponsors, and participants. Center for Medicare Advocacy Executive Director Judy Stein, and Georgetown University Professor and President of the Center for Medicare Advocacy’s Board of Directors, Judy Feder opened the Summit and framed the discussion of the day around the theme of Medicare’s Promise and Challenges, particularly in light of the ongoing pandemic. Expressing appreciation for speakers, presenters, awardees, sponsors and registrants who made the virtual Summit possible, Ms. Stein emphasized the importance of health care during the pandemic, and the renewed call to join together as a community to strive for health care access for all. “The COVID crisis shines a bright light on the importance of quality health coverage and care,” she said.

Medicare’s Promise and Challenges – From Inception, Expansion, Privatization, and Beyond

Cathy Hurwit, former Chief of Staff to Representative Jan Schakowsky (D-IL), moderated the panel entitled Medicare’s Promise and Challenges – From Inception, Expansion, Privatization, and Beyond. As we approach the 55th Anniversary of Medicare, Tricia Neuman, Kaiser Family Foundation (KFF) Vice President for Medicare, and Judy Stein provided Medicare’s historical background and analyzed the program’s achievements, gaps, and predicted future developments and challenges. Ms. Hurwit set the tone of the panel discussion by reminding the group that prior to the lifesaving “blessing” of Medicare, only about half of seniors had health insurance.

Ms. Stein explained how the social insurance model of Medicare, with uniform benefits, shared risk and shared interest, meant that there was increased health and economic security for all older adults and their families. She emphasized the core considerations for any Medicare changes or expansion efforts. These include fair, adequate, and available coverage that is affordable for beneficiaries, and sustainable for the Medicare program.

Ms. Neuman also reviewed trends related to the growth of enrollment in private Medicare Advantage plans and discussed KFF focus group results about the manner in which beneficiaries make choices when selecting a plan. She explained that the vast number of options become overwhelming; this coupled with limited guidance, leads many beneficiaries to remain in plans that do not serve their needs. “While the marketplace is established on the notion that people will compare plans and choose each year – that is just not happening… people stick with what they have because it is too difficult to make a move….I don’t think it is exactly what policymakers envisioned when they envisioned such a robust marketplace.” Neuman cited that this is a particular problem for individuals with health care issues, especially cognitive issues.

Amos Goodall presented the Award of Excellence in Elder Law from the National Elder Law Foundation to Judy Stein. Ms. Stein shared heartfelt appreciation to the Foundation, and said that the Foundation is a professional community “in which she found a home, and friends and colleagues and a deep commitment to advancing this world towards the common good.”

With welcoming remarks by Judy Feder and Sen. Jay Rockefeller, Wendell Potter was recognized as the 2020 Sen. Jay Rockefeller Lecturer. After nearly 15 years at Cigna Corporation, including leading the company’s corporate communications team and serving as chief corporate spokesperson, Potter left his corporate career to advocate for meaningful health care reform. He made headlines in 2009 when he disclosed in Congressional testimony how insurance companies, as part of their efforts to boost profits, have contributed to spiraling health care costs and the growing number of Americans without health insurance. He also revealed how insurance companies use their customers’ premiums to wage multi-million dollar PR and lobbying campaigns to influence public opinion and public policy. 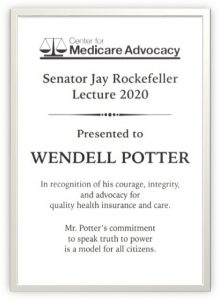 Judy Feder introduced Sen. Rockefeller and highlighted that the COVID crisis demonstrates the importance of public and political leadership. Calling Rockefeller “someone who reminds us of what the presence of leadership can mean,” she cited his empathy for his constituents and initiative in pursuing the best in public policy for those he represented.

Sen. Rockefeller then introduced Mr. Potter saying that he “left the [health insurance] industry because he was confounded by its tone-deafness to the needs of the American people.” Sen. Rockefeller lauded Mr. Potter’s description of the term “choice” used by private insurance companies as a ploy used to entice people to believe that insurance companies provide a freedom that public programs did not.

Mr. Potter opened his remarks by saying that he needs to “make amends for what he used to do for a living” referencing his work for insurance companies. He shared heart-wrenching stories about individuals who were denied life-saving care solely because of an insurance company stepping in between a patient in need, and a doctor and hospital set to provide the needed care. He stressed that more must be done to get people covered and to get providers of all types to stop “putting profits over patients.”

Mr. Potter emphasized in his remarks that Medicare was a “lifesaver for untold millions of Americans” and must be “protected, improved and expanded to cover every last one of us.”

Ms. Lieberman shared her experience with covering Medicare for decades, and how the narrative has evolved over the years, with turning points during the creation of the Part D prescription drug benefit and during the Affordable Care Act period.

Ms. Lieberman also relayed that many journalists often shy away from writing about Medicare because of the complexity. Mr. Miller agreed with this assessment, saying that Medicare and Social Security have a “long learning curve,” that requires journalists to “relentlessly fact-check” due to this complexity. He further explained that the changing landscape of media and journalism also impacts Medicare coverage. With declining newsroom staffing limiting the ability for journalists to fully immerse themselves in a beat and cover a topic in great detail, mastering the complexities of the Medicare program can be challenging.

Ms. Jaffe also raised the issue that Medicare topics are infused with politics, and have lengthy, complex rules, and that Medicare announcements happen at inconvenient times, making it difficult to get in touch with independent sources. “It’s a lot of responsibility to put on reporters,” she said, and concluded “Reporters need all the help they can get… Feel free to contact [them].” 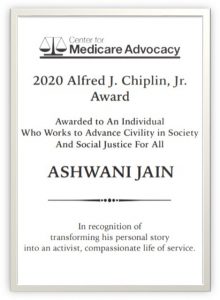 For decades, Alfred J. Chiplin, Jr. (Chip) was a beloved and admired leader in the elder law, disability and health care rights communities. To honor Chip’s long-term advocacy and commitment to civility and justice for all members of society, the Center for Medicare Advocacy established an award in his honor in 2017. The Alfred J. Chiplin, Jr., Social Justice & Advocacy Award, is given annually to an individual who works to advance civility in society and social justice for all – as Chip did for decades.

The Center for Medicare Advocacy was honored to name Ashwani Jain as the 2020 Chiplin awardee. Mr. Jain, Program Director at the National Kidney Foundation, is a 17-year survivor of childhood cancer. He transformed his personal story into an activist, compassionate life of service. At the National Kidney Foundation he helps area residents get access to primary care services and free preventative health screenings. He is also an Ambassador for the Make-A-Wish Foundation, a YMCA Youth Mentor, and former Presidential Appointee in the Obama White House. The award will be physically presented to Mr. Jain at the Summit in 2021. We look forward to hearing Mr. Jain speak about his experiences when he accepts the award, and we hope that the beloved Chiplin family will be present as they have been in previous years.

Judy Stein closed the Summit with appreciation for the awardees, panelists, attendees, and sponsors who made the event possible – Lecture Sponsor the John A Hartford Foundation, and panel sponsors AARP, Alzheimer’s Association Alzheimer’s Impact Movement, Powers Pyle Sutter and Verville, PC, Santa Fe Group, and SEIU. Ms. Stein concluded with a hopeful promise for an in person 8th Annual Summit in 2021. In the meantime, registrants for the Summit can also attend the Center’s follow up webinar that was included with their registration. The webinar, Medicare Matters in Challenging Times, will be presented on May 20 at 2pm EDT.

Thank you to everyone who joined us for the 2020 Virtual Summit. Stay well!

David Lipschutz from @CMAorg said he was still evaluating the rule, but noted: “It is unclear if they are using all of their authority.”
📝: @FredSchulte via @KHNews
#MedicareAdvantage
http://bit.ly/3RmY6bU