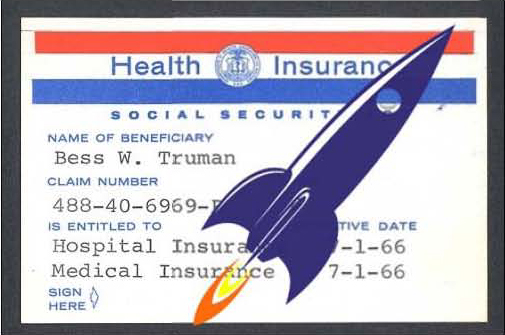 We've come a long way since Medicare first started covering Americans who were 65 or over on July 1, 1966. Imagine what it took to get everyone enrolled, since half of everyone in that age group had no health insurance at the time. Imagine the relief the new program brought to families all over the country.

The Center for Medicare Advocacy is honoring this accomplishment by counting down to July 1st – the 50th anniversary of the effective date of the Medicare program. We will recount little known facts about the program as well as individual and systemic accomplishments and challenges.

10. In 1966, 19 million people ages 65 or older were enrolled in Medicare – just one year after the program was enacted in 1965. Consider what an accomplishment this was, especially in a world with no internet or social media.

8. Medicare hospice coverage was added in 1982 – most people now get some hospice care before they die.

3. Medicare has enhanced social justice in America in ways that are often not recognized. For example, in order to receive Medicare payments when the program began in 1965, hospitals were required to desegregate, increasing civil rights, health equity and access to care, particularly in southern states.

In 1987, Congress passed the Nursing Home Reform Law, which amended Medicare (and Medicaid). Effective in 1990, the Reform Law mandated that all nursing home residents receive the care they need to attain and maintain their highest practical physical, mental, and psychological well-being. As a result, the quality of care and life, protections from involuntary transfers and discharges and other resident rights were advanced nationwide.

2. The Jimmo v. Sebelius case was settled in January, 2013. Applicable nationally, the Settlement acknowledged that patients are not required to improve in order to obtain Medicare for skilled nursing and therapy. The Settlement required CMS to review and rewrite coverage policy and provide education explaining that Medicare can be available for skilled care to maintain one’s condition or slow deterioration.

1. 50 years later, in 2016, almost 60 million Americans have access to health care as a result of Medicare!
We need to help Medicare grow, with renewed revenue and updated benefits. Coverage should be added for oral health and dental care, audiology and hearing aids, vision care, and prescription drug coverage in the traditional Medicare program.
It’s our turn to have the vision and fortitude Americans had in 1965 – to keep Medicare viable, accessible, and relevant for generations to come.