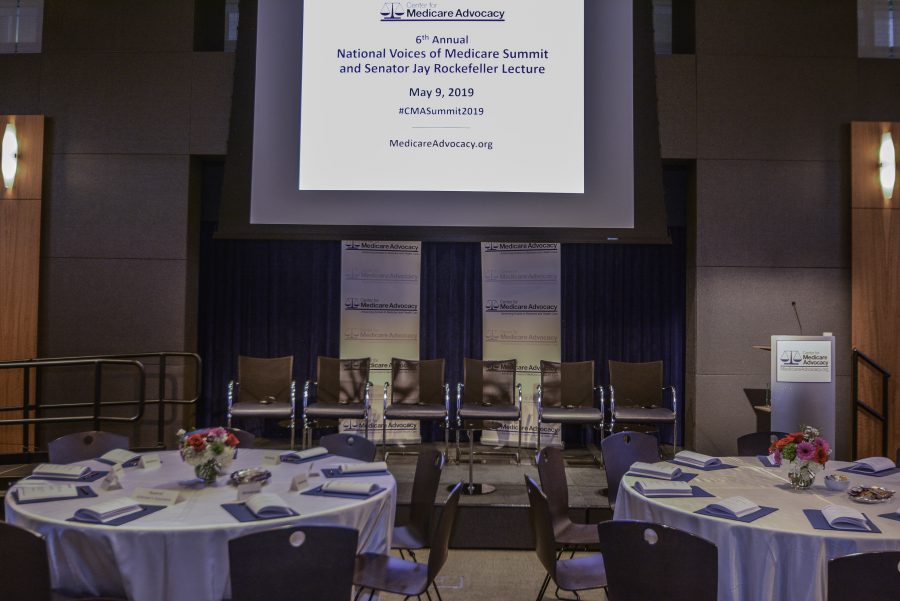 The Center thanks all who participated in the sixth annual National Voices of Medicare Summit and Senator Jay Rockefeller Lecture at the Kaiser Family Foundation in Washington, DC.

The theme of the day was Health Care as a Human Right: Medicare’s Role in Making it a Reality. The Summit convened advocates, leading experts, and policy-makers to discuss access to quality health care for all, the challenges and successes of Medicare, and what we can do moving forward.

Below are some highlights from the Summit:

Medicare, Health Care and the Rights of Patients and Caregivers (Personal & Professional Perspectives): 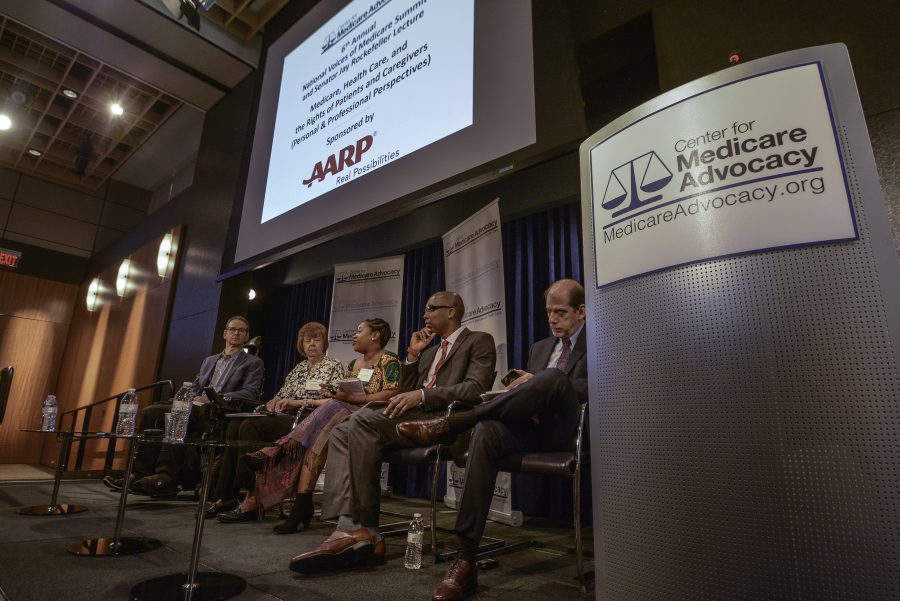 Moderated by Brian Lindberg, from the Campaign to End Unwanted Medical Treatment and the Consumer Coalition for Quality Health Care, this panel explored the roles of patients and caregivers in achieving the common goal of aging with dignity, through both professional and personal perspectives. Ben Belton, AARP, and inaugural Alfred J, Chiplin, Jr. Social Justice and Advocacy Award recipient, discussed the importance of Medicare, and global approaches to health care coverage. Susie Young, Direct Care Worker and member of SEIU 775 in Washington State, and Josephine Kalipeni, from Caring Across Generations, and the second annual Chiplin Award recipient, discussed how caregivers provide the backbone of the care system. They stressed that caregivers provide care for beloved family members with disabilities and/or aging family members, so they must be treated with the value and respect that corresponds to the importance of their work and the value of their roles to families and communities. This means providing caregivers with decent wages and benefits, so that they too can have a quality standard of living. “Quality jobs and quality care go hand-in-hand,” Young said. Henry Claypool, from the American Association of People with Disabilities (AAPD), addressed the differing needs of younger adults with disabilities who may need assistance in order to continue working and to reach other goals that may differ from elderly beneficiaries receiving Long Term Services and Supports. 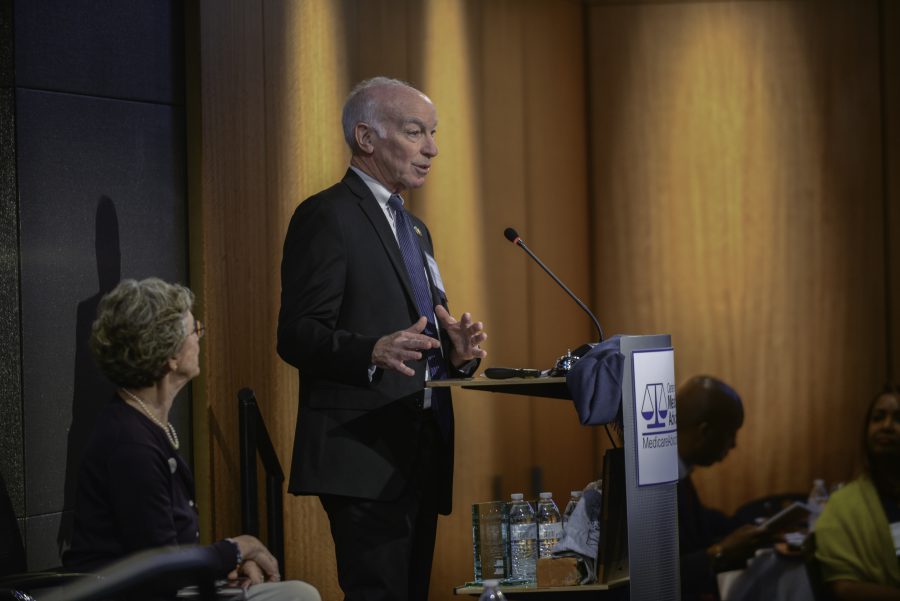 Joe Courtney (D-CT-02) spoke about the observation bill that he reintroduced on March 12, 2019. The Bill deems an individual receiving outpatient observation services in a hospital as an inpatient for purposes of satisfying the three-day inpatient hospital-stay requirement with respect to Medicare coverage of subsequent skilled nursing facility care. The Center for Medicare Advocacy has long advocated against observation status because it harms beneficiaries in myriad ways, including barring access to Medicare coverage and necessary skilled nursing facility care for many of the most vulnerable older people and people with disabilities. The Center for Medicare Advocacy strongly endorses Rep. Courtney’s legislation. Rep. Courtney discussed how placing beneficiaries on observation status was “surprise billing on steroids.” The Center for Medicare Advocacy is also currently litigating a nationwide class action lawsuit seeking the right for beneficiaries to appeal their placement on observation status. 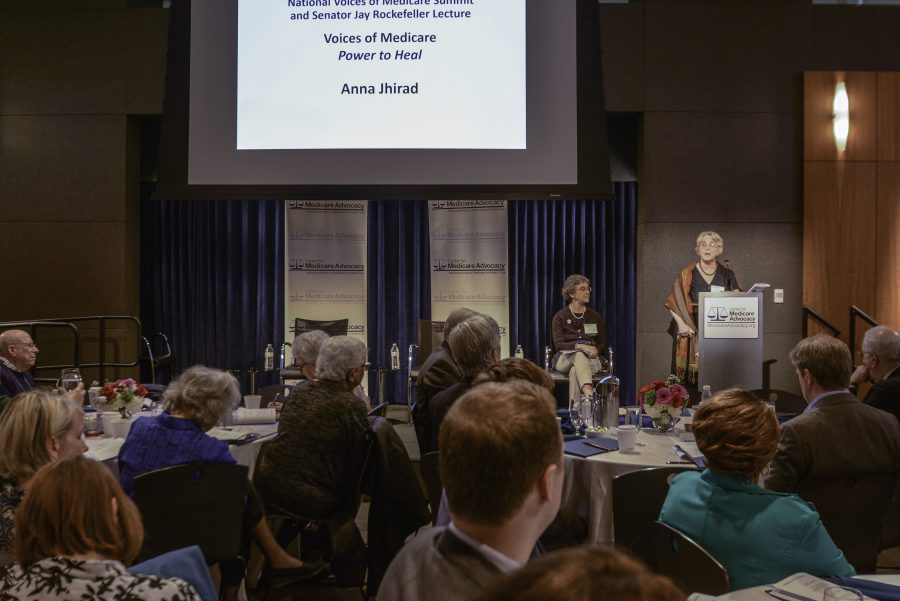 Anna Jhirad, lead writer of the film Power to Heal spoke about Medicare’s role in the Civil Rights Movement and her personal experience as a child witnessing the poverty and inadequate health care in rural Virginia. She explained how government action and Medicare’s enactment resulted in a coordinated national effort to rapidly desegregate thousands of hospitals across the country. This was followed by a presentation of a clip from the film. For more information, or to schedule a showing of the film, contact the documentary’s producer, Dr. Barbara Berney at hospdeseg@gmail.com. 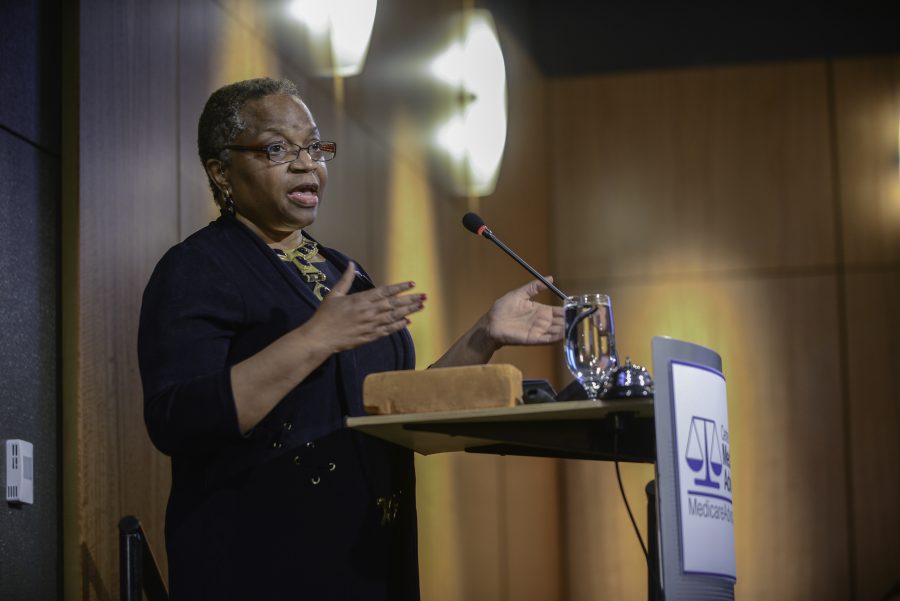 Lucille Chiplin Johnson, from North Central Texas Council of Governments (NCTCOG), spoke of the shameful period in our history in which access to health care was tied to race, and disparities in quality of care were rampant. She spoke from personal experience of African Americans dying from inadequate care while waiting to get medical care. African American doctors were not permitted to have admitting privileges at most hospitals and hundreds of hospitals would only care for white Americans. Johnson spoke of the segregated hospital in Mississippi featured in the Power to Heal film. Johnson presented a brick from that hospital from Mayor George Flaggs on behalf of the city of Vicksburg, Mississippi, to the Center for Medicare Advocacy, as a symbol of the power of government and Medicare to desegregate hospitals. Johnson is also the sister of beloved Alfred J. Chiplin Jr., for whom the Center for Medicare Advocacy established The Alfred J. Chiplin, Jr., Social Justice & Advocacy Award in 2017.

What Medicare Could Become – Medicare for America: Rosa DeLauro: 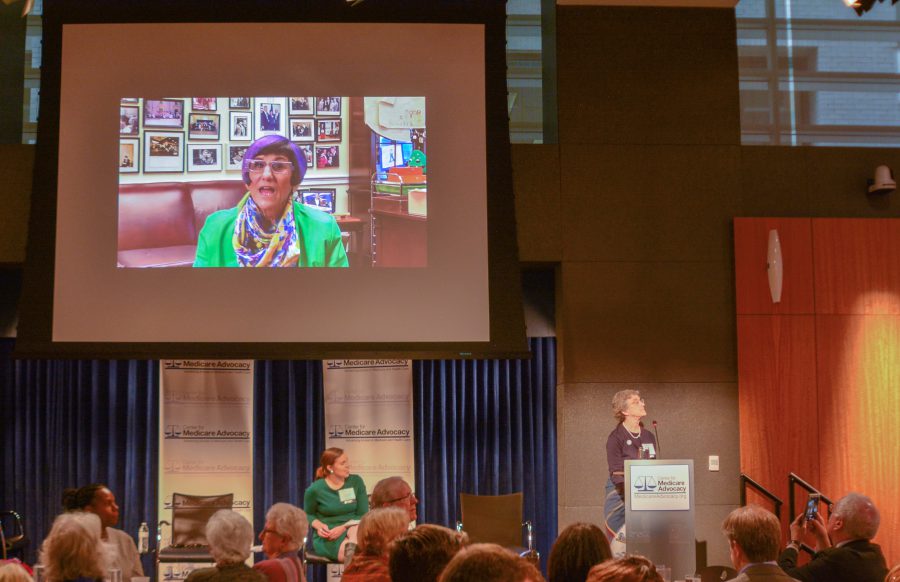 Kept at the Capitol due to an important committee mark-up, Rep. DeLauro (D-CT-03) filmed a video specifically for the Summit to discuss the Medicare for America bill she reintroduced on May 1, 2019. She explained that the bill expands on Medicare’s and Medicaid’s covered benefits and services including new coverage for prescription drugs, dental, vision, and hearing services, a cap on out-of-pocket expenses, an end to prior authorization and step therapy requirements, as well as long-term supports and services for seniors and Americans living with disabilities. Rep. DeLauro said that the bill also would achieve universal coverage while preserving the option of quality employer-sponsored insurance. Rep. DeLauro’s Legislative Assistant, Caitlin Peruccio was on-hand at the Summit to further discuss the bill and answer questions.

Medicare: What It Was, Is, and Could Be: 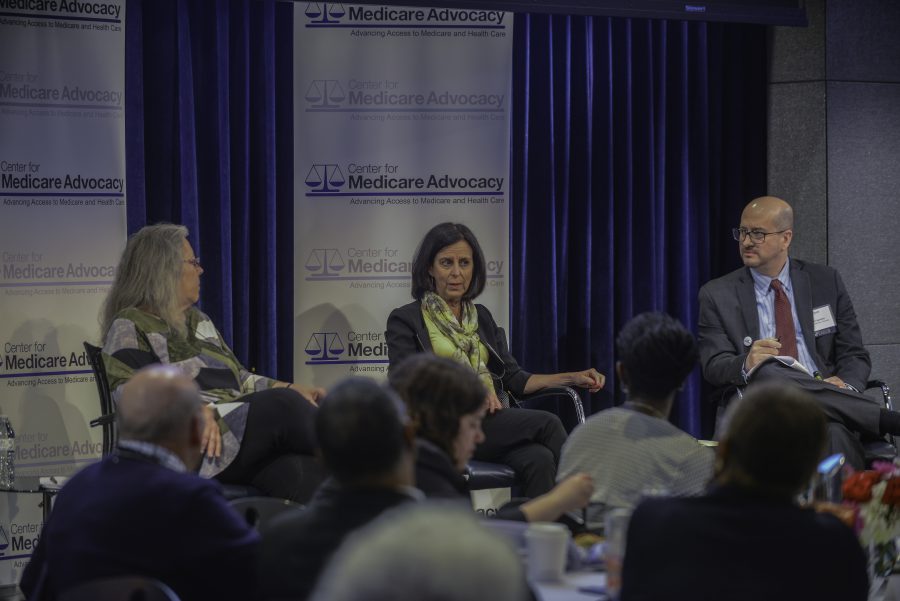 The Center for Medicare Advocacy’s David Lipschutz led a panel that explored Medicare’s past, present and future by analyzing the program’s achievements, gaps, and predicting future developments. Cathy Hurwit, former Chief of Staff to Representative Jan Schakowsky (D-IL), and Tricia Neuman, Kaiser Family Foundation (KFF) Vice President for Medicare, addressed barriers to care, such as limited Medigap access, the increase in Medicare Advantage enrollment, and the ever-increasing costs of prescription drugs. Referring to limited Medigap access, Tricia Neuman said “we say we are giving people choice, but we really aren’t because people can’t switch [from a Medicare Advantage plan to traditional Medicare without access to a Medigap plan].” Ms. Hurwit cautioned that when developing health care policy the costs associated with new benefits are only a part of the discussion, citing that health care is “a value-based discussion as much as dollars and cents.” She urged policy- makers to think about the benefits they want to include first, and then how to pay for the benefits, “not think about the CBO [Congressional Budget Office] score first.” 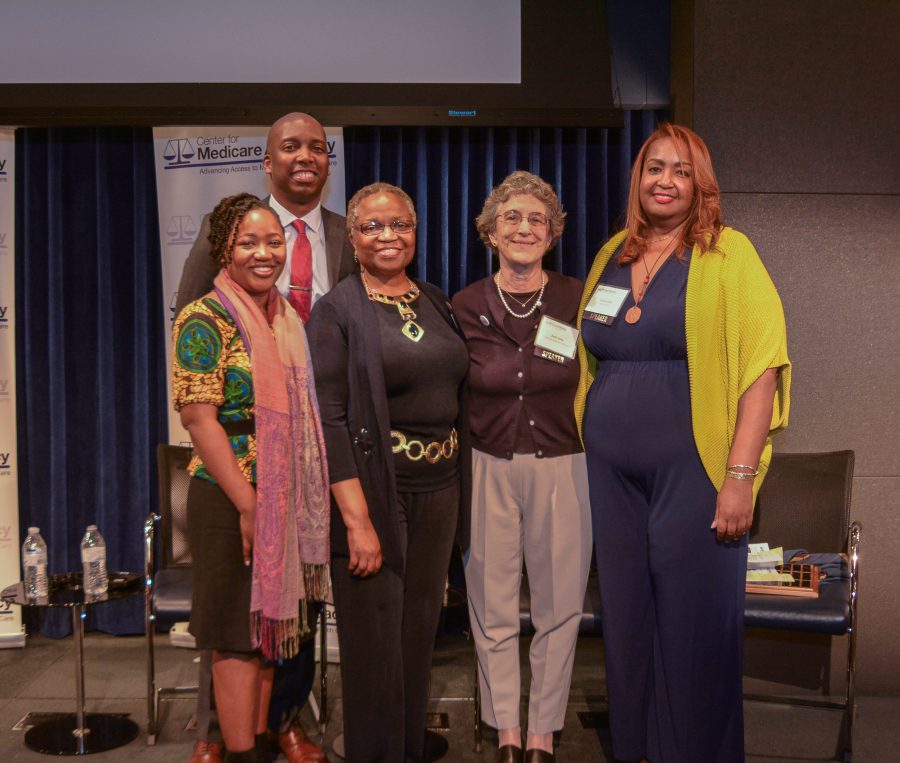 The third annual Chiplin award was presented to Vanessa Hill, the founder and director of Project Nana. Her focus on “seasoned” women’s health, grew out of her love, respect, and the influence of her Nana, who died two weeks after diagnosis of Stage 4 cancer of the uterus. This led Ms. Hill to begin Project Nana, a non-profit senior women’s organization, founded to provide awareness, education, resources and advocacy for matriarchs about postmenopausal women’s health, access to healthcare and quality of life. Hill thanked the Center for Medicare Advocacy for the honor and recognition of Project Nana. Her work is aimed at guiding women to be aware of their health care options and needs, so other families do not experience the loss of a beloved mother or grandmother, as she did, from a condition that could be treatable with timely and proper health care. Citing her drive to begin Project Nana and design its outreach and advocacy for “seasoned” women, Ms. Hill said “it simply came out of my grief.”

For decades, Alfred J. Chiplin, Jr. (Chip) was a beloved and admired leader in the elder law, disability and health care rights communities. To honor Chip’s long-term advocacy and commitment to civility and justice for all members of society, the Center for Medicare Advocacy established an award in his honor in 2017. The Alfred J. Chiplin, Jr., Social Justice & Advocacy Award, is given annually to an individual who works to advance civility in society and social justice for all – as Chip did for decades. Vanessa Hill and her work reflect Chip’s legacy of compassionate, determined advocacy, as Ben  Belton and Josie Kalipeni, earlier awardees have, in support of older people and people with disabilities. The Center was honored to have several members of the Chiplin family in attendance at the award ceremony. 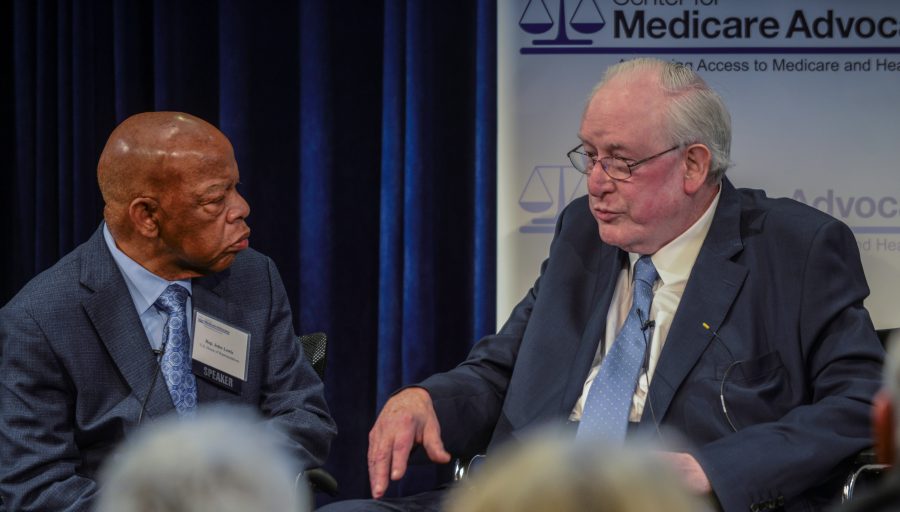 The Center was privileged to recognize John Lewis (D-GA-05), and his extraordinary leadership in advancing access to affordable health care and justice for all as the 2019 Sen. Jay Rockefeller Lecturer. Often called “one of the most courageous persons the Civil Rights Movement ever produced,” Rep. Lewis has dedicated his life to protecting human rights, securing civil liberties, and building what he calls “The Beloved Community” in America. Sen. Rockefeller was at the Summit to provide remarks and introduce Rep. Lewis. “He just never stops fighting for things he believes in and things not being done,” Rockefeller said.

Rep. Lewis’ inspirational remarks began with a discussion of how hospital segregation before Medicare cost people their lives, “where would we be today, where would our nation be without Medicare,” he questioned. “I believe in my heart of hearts that quality, affordable health care is a right,” he continued. Rep. Lewis provided a call to action to advocates in attendance to always fight against injustice, and not settle for the status quo, no matter how challenging the process may be.

The Center for Medicare Advocacy thanks all of our attendees, presenters, and especially our generous sponsors – The John A. Hartford Foundation; Graham Healthcare Group;  Alzheimer’s Association; SEIU; AARP; Santa Fe Group; and Powers Law. Your participation makes the National Voices of Medicare Summit & Sen. Jay Rockefeller Lecture a remarkable event. We look forward to working together to advance access to quality health care for all – and to further exploration at the 2020 Summit. 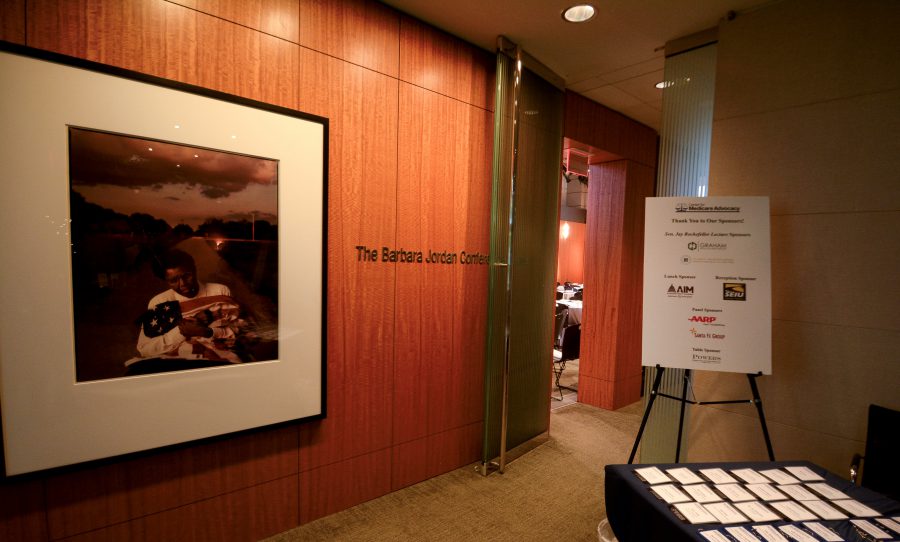